FUJI Corporation’s new businesses dealing with transfer support robots and deliver locker system have been steadily expanding. To expand sales channels, FUJI has showcased these products in exhibitions and industries of different fields than exhibitions of mounters and industrial robots, in which the company used to take part.

In response to Japan’s growing shortage of healthcare personnel, particularly caregivers, FUJI introduced a transfer support robot in Apr. 2016. Subsequently, the company has released new models and expanded the business. The new model Hug T1-02 released in Oct. 2019 received Japan’s Health, Labor and Welfare Ministry Award at The 9th Robot Award co-organized by the Ministry of Economy, Trade and Industry and the Ministry of Health, Labor and Welfare.

Hug T1-02 adopts a new design that is friendly to people and it is lighter than its predecessor models, adds Suhara. At present, FUJI has set up distributors, including retailers of nursing care products, across Japan and cumulative sales have reached 1,300 units.

Use of Barcodes, QR Codes

Quist enables delivery and reception of commercial products using barcodes and QR codes in a simple and smart manner. It can be operated as a real-time locker management and monitoring system using the cloud system.

Japan Post Co., Ltd. has adopted Quist for its Hako Post delivery locker service and installed it in stations of JR East Japan Railway Company. Then, Quist was adopted for CAINZ PickUp Locker installed in CAINZ home center in Saitama Prefecture, and installed in about 50 stores across Japan in stages.

Suhara says, “Because of the need to decrease contactless transactions, the demand for Quist has been expanding.” 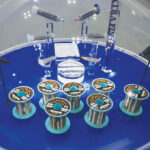