Toray Industries, Inc., has developed a new version of Lumirror, a range of biaxially oriented polyester films. It created the new film by precisely controlling the height of surface protrusions. It thus eliminated surface defects from coarse protrusions while delivering slipperiness and other desirable handling properties.

The new offering applies to functional films for semiconductors and electronic components, for which miniaturization is progressing. It also suits films for the manufacturing processes of chips and components.

Base Material for Film

Lumirror is a common base material for functional films in electronic components and display applications carrying exceptional properties. It is also used as base material for release, carrier, protection, and other films for their manufacturing processes.

High-performance films need excellent smoothness and an absence of coarse surface protrusions. It is also important to ensure proper handling, as greater smoothness can impair processability and slipperiness.

Nano-order miniaturization is progressing for state-of-the-art semiconductor and electronic component applications. Even minuscule lubricant particle agglomerations can lead to coarse protrusions on film surfaces and cause nano-level coating and transfer defects. Scattered light and reduced transparency have also become issues with display applications.

The company will leverage these attributes in developing an array of applications for functional films for cutting-edge displays, optical devices, and battery materials, for semiconductor and electronic component applications, and for films in manufacturing processes for these applications.

Toray will keep developing advanced, highly functional materials that contribute to social progress in line with its commitment to innovating ideas, technologies, and products that deliver new value. 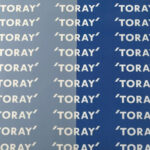