Nippon Chemi-Con Corporation has developed the supercapacitor DLCAP modules optimal for backup power supplies in emergencies such as power losses. The products are especially for use in industrial equipment.

Many backup power supplies of industrial equipment use multiple DKA Series in connection. Because of this, systems will require separate balanced circuits and failure detector circuits.

However, as this module has built-in balanced circuits and failure detector circuits, it reduces the strain of equipment design. By changing the terminal to screw terminal type, Nippon Chemi-Con has made it easier to mount on equipment.

The MDKA150S8R3PE6111A module connects six radial lead type DLCAP DKA Series. It has a rated voltage of 5V, capacitance of 50F, and case size of ⌀18×50mm. This uses up to 15V and the capacitance achieves 8.3F. Developers can integrate the modules in series or in parallel as needed for embedding in systems.

Nippon Chemi-Con has tackled the development of a variety of electronic components, starting with aluminum electrolytic capacitors. As a supporter of this advanced electronic industry, the company said it will continue to contribute to its development through its products. 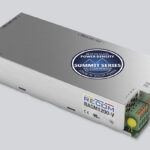