Nitta Corporation has added the NITTAOMEGA type L with load capacity of 350 to 600kg to the new NITTAOMEGA Series of automatic tool changer (ATC) for robots. The series complements the needs of robots to handle heavy objects in the automobile manufacturing process. It is used also for taking out casting parts ant exchanging molds for the construction machinery.

The fifth model of NITTAOMEGA has been developed under the concept of giving robots a tool exchange function and of greatly expanding application flexibility. The thickness of both the robot adapter (thickness 48.6mm) attached to the robot side and the tool adapter (47.15mm) attached to the tool side has been reduced in such a way that the thickness when connected is 96mm, and the robot adapter mass and the tool adapter mass have been reduced to 9.8kg and 7.9kg, respectively. The load capacity of the heavy load transfer robot has been increased, contributing to the higher speed. Compared to the conventional model of the company, the new model is 51 percent thinner and 32 percent lighter, and the load capacity has been increased by 200kg. Its external dimension is f307 mm.

NITTAOMEGA type M has portable mass of 50 to 250kg; 90mm thickness when connected; body mass of 6.2kg; and external dimensions of f235mm. On the other hand, NITTAOMEGA type XM meanwhile has 250-350kg; 90mm thickness; 11.3kg body mass; and external dimensions of f265mm). Meanwhile, the CT module (power supply, servo motor, water supply, air supply, signal), which is a function module that can be installed on the robot side and the tool side, has been increased from former three modules to four in both sides. The CT modules have been built into the main body to minimize the overall outer diameter. The CT modules can be shared by the types M, XM, and L.

Haruo Ito, Sales Manager of Mechatronics at Nitta says, “Robot automation is progressing in all industrial fields and the new ATCs complement the changing needs. Currently, more than 200,000 units are used in 28 countries around the world. The new product NITTAOMEGA type L has been lined up as a high-end portable type of the conventional types M and XM, widely used because of their lightweight and thin concept.”

“It meets the needs for reducing the weight of automatic tool changers because the speed of heavy load transfer robots increases in automobile manufacturing processes. As an epoch-making ATC with a built-in automatic attachment and detachment mechanism for circuits such as electricity, air, and water, the series has further enhanced the versatility,” adds Ito.

The shape of the cam and lock parts of the original cam-lock mechanism has been devised for the purpose of making ATC thinner and lighter. While maintaining the safety with the large-diameter cylinder and cam-lock system, which is a major feature of the NITTAOMEGA type series, durability has been greatly improved and is easy to maintain compared to conventional models. The cam opens and closes synchronizing with the vertical movement of the piston due to air pressure, realizing connection and disconnection. Thus, the piston can reliably control the opening and closing of the cam.

The power supply unit supports high current with an equivalent current of 200A (in the case of the direct cable insertion type). The water supply module is of non-spilling type, which comes with reduced water spillage by 90 percent when being attached and detached, compared to conventional products. It can be replaced on a port-by-port basis and has been improved in maintainability and flow rate characteristics. A signal pin having a self-cleaning shape is adopted as a dust/spatter countermeasure. The reliability of the signal communication has been improved by optimizing the aluminum housing and internal wiring.

The fall prevention equipment consists of a valve device that controls the separation air of ATC and operates by the following mechanism. With the configuration of two valves, air is supplied to the unchuck port only when both valves are on (the robot side is connected to the tool side and on the pedestal) or when both are off (the robot side is disconnected from the tool side and off the pedestal). It prevents fall due to wrong operation of the valve mechanism, erroneous manual switching of the solenoid valve and electric noise. It can be easily added to existing systems.

Ito says, “Following the trend of higher speed operation of robots, the company released the type M with load capacity of 50 to 250 kg in 2016 and the type SC with capacity of 5 to 10 kg and type S-OY with capacity of 12 to 25 kg in 2017 as the thin and lightweight series of ATC. The type L has been added to the types M and XM as medium-sized and large-sized ATCs, and the load capacity has been expanded to the range between 5 kg to 600 kg to support the diversification of robots. In the future, the company will continue to expand the products of ATC such that the range of supporting load capacity is increased over the current products. It will expand the mechatronics business in response to the diversified needs in all industrial fields where robots are being introduced.” 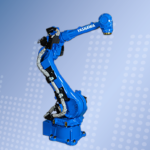 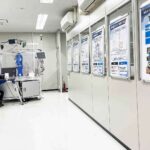