FUJI Corporation has been expanding its industrial robot business with the SmartWing compact multi-joint robots at the core. As part of efforts to expand its product lineup of SmartWing, FUJI started accepting orders for four models of the SW-RXS SCARA robot in August.

FUJI positions SmartWing robots and its mainstay mounters in its Robot Solution Business and has been promoting a strategy to meet a broad range of needs in smart factories by turning mounters into a platform. FUJI has been selling SmartWing on full scale since 2017.

SmartWing is suitable for the automation of works, such as arranging nuts and washers, tightening screws, arranging screws, packing, arranging loose workpieces into trays, sorting workpieces, and inserting tubes. Taking advantage of its user-friendly feature that needs no training to input task details, FUJI has been selling SmartWing to diverse industries, including the electronic devices industry, as a robot that can be used immediately upon installation.

To meet the needs for the automation of simple manual works, FUJI has pursued simple installation and the ease of use when developing the SCARA robots.

Featuring a simple structure and a slim robot arm, the SCARA robots can be installed in a small space.  FUJI’s original software Job Editor supports programming work.  They support a wide range of processes and applications, including assembly, transfer, and arrangement.  By expanding the lineup of SmartWing, FUJI promotes the proposed packages that include peripheral units of the robot, enabling the proposal of various applications for automation in the future.  FUJI targets to ship 175 units of SW-RXS in the first fiscal year, and 350 units in the next fiscal year.

To strengthen its robot business, FUJI invested in July last year to RIOS Corporation, a startup company for artificial intelligence (AI) tactile robot technology through its US subsidiary Fuji America Corporation headquartered in Illinois.  RIOS, which was established in 2018 in California, United States, owns technology that enables them to provide compact modules by integrating the section for various types of sensing, such as pressure and temperature, as well as tactile sensing, and the intelligent section using AI.

Adopting this technology to the robot hand enables not only optimum grip but also slip detection, and detection of surface shape and texture.  This technology can be implemented to various applications in addition to transfer robots.

As the advanced robocell series of SmartWing, FUJI has developed and commercialized the SW-BA printed circuit board assembly robocell that automates the manual PCB assembly process, and started accepting orders in April. FUJI has met the increasing needs of the mounting industry for the automation of the manual PCB assembling process, such as the mounting of odd-formed components. By providing various functions needed for the automation of manual work in a package, FUJI has eliminated the need for concept design by customers and developed a low-cost and easy-to-install product. 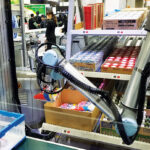