From Yamaha Motor Co., Ltd. comes i-Cube10 (YRH10) hybrid placer combining surface mounter functions for electronic components and a die bonder for wafer components in one placement machine. This is the first complete redesign in the past 14 years, yielding 50 percent greater mounting accuracy and production capability than previous models.

i-Cube10 (YRH10) was developed as a successor to i-CubeIID (YHP-2D), known for its space-saving design as well as excellent productivity and versatility with its hybrid placer for device assembly and a wafer feed unit as standard equipment. The new i-Cube10 (YRH10) retains the same high processing compatibility suiting a wide range of electronic components and semiconductor packages, but highlights 50 percent higher production capability and mounting accuracy, achieving a bare chip mounting speed of 10,800cph from wafer supply and a mounting accuracy of ±15μm.

The main features of YRH10 include 1) high-speed productivity by optimizing recognition camera operations for the mounting head and wafers, component recognition via the head-mounted scan camera, adoption of a 10-unit multi-nozzle mounting head, and accelerated wafer swaps; and improved mounting accuracy by adopting a high-rigidity conveyor, axis control optimization, a heat compensation feature and more, 2) high versatility that allows mounting of surface mount devices (SMD) as well as wafer components with a single unit, and 3) features that are user-friendly.

Operation of the mounting head and wafer camera has been optimized, eliminating all standby time loss of the mutual units. By equipping the head with a scan camera, component recognition following wafer picking is completed during movement and taking the shortest path to the mounting position becomes possible, creating an efficient operations cycle. The number of nozzles on the mounting head has been increased from 4 to 10, drastically reducing the number of head cycles needed per number of components to be mounted. With these features, i-Cube10 (YRH10) achieves a high bare chip mounting speed of 10,800cph.

A high-rigidity conveyor was adopted to reduce its dynamic vibration during head operation,  and optimization of axis control parameters, a heat compensation feature and more achieve and maintain the unit’s high mounting accuracy of ±15μm (μ+3σ).

As various types of components can be mounted with i-Cube10 (YRH10), a single unit can be used for mounting operations instead of having to divide tasks among multiple devices as was required before.

The unit is also equipped with a variety of functions facilitating its high versatility, such as a non-stop wafer feed unit that can set up to 10 wafers, compatibility with PCBs up to L330×W250 mm in size, automatic tool replacement, and a dual push-up unit.

In addition, i-Cube10 (YRH10) is also compatible with the auto-loading feeder Yamaha surface mounters are known for, and can always supply tape reel components without stopping production or requiring supply timing selection.

It is also packed with user-friendly features, such as a newly developed user interface with improved usability and a feeder load capacity twice that of previous models. 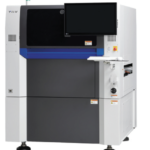