The Japan Robot Association (JARA) reported that the industrial robot market for 2021 posted record high. This trend is seen to continue to expand.

It is interesting to witness the next waves of growth in the robot industry.

The Ministry of Industry and Information Technology (MIIT) of China recently announced the 14th Five-Year Plan for the development of the country’s robot industry. The plan lays down China’s strategies to make the country a global hub for high-end robot manufacturing by 2025.

China aims to achieve breakthroughs in robot-related important technologies and high-end products. It plans to catch up with global level in the performance and reliability of servo motors and important components. With this it plans to grow the robot industry at an annual average of 20 percent between 2021 and 2025.

China, the largest export destination of Japan, has been advancing the domestic production of industrial robots as a national policy. The country is positioning the robot industry as one of its priority growth fields under “Made in China 2025”. China has begun to put emphasis on exports on full scale with some Chinese manufacturers having made inroads into the Japanese market. Thus, they are expected to influence the industrial robot market in the future.

Interestingly, Chinese robot manufacturers have grown rapidly. According to the Chinese Institute of Electronics, China’s domestic share increased gradually from 22 percent in 2017 to 27 percent in 2018, 29 percent in 2019, and 30 percent in 2020.

It is said that there are more than 120 main industrial robot manufacturers in China. SIASUN, China’s largest state-run robot manufacturer, has its main plant in Shenyang. The company has also made an inroad into the Japanese market.

Meanwhile, Standard Robots specializes in the development and manufacture of industrial use autonomous mobile robots (AMRs). The company has introduced AMRs to Foxconn, ZTE, and HUAWEI, as well as to more than 20 Japanese companies. 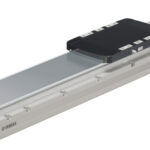