The controller is optimum for robots, transfer equipment, and semiconductor manufacturing equipment. It can be connected to diverse open networks, and control various robots in a wide range of fields.

The SANMOTION C S500 Series controls up to 64 axes at high speed at a 1msec period at the shortest. Thus, it enables high-precision position control. It can simultaneously control multiple robots, such as assembly and sorting robots, with a single controller.

Japan Aviation Electronics Industry, Ltd. (JAE) promoted various connectors and antennas with the theme of “Connectivity” technology, which contributes to the future of the robot industry.

Among the company’s extensive exhibits was a teaching pendant. A teaching pendant is used for online programming of industrial robots. Recently, lightweight is given importance to reduce the burden on workers, as well as design. JAE’s product meets these requirements.

JAE has been developing next-generation teaching pendants. The company has adopted new materials that enable weight reduction, while maintaining rigidity in this development. The company has also been pursuing ease of use in cooperation with industrial designers. Furthermore, the company also showcased a flight controller for drones under development. 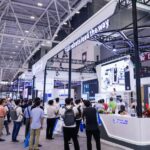 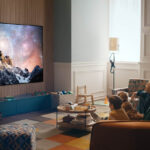