As set forth in its long-term vision, TOWA Corporation aims to venture into new business leveraging its cutting tools technologies.

TOWA expands its cutting tools nurtured in the production of cutting tools for precision molds of semiconductor resin sealing equipment. It bolsters the contract processing business of proprietary dry and wet coatings, aiming for its expansion.

Both efforts are part of the plans for new businesses. This is among the priority business strategies the company defined in its long-term vision TOWA Vision 2032 (FY2022 through FY2031).

Hirokazu Okada, President & Chief Executive Officer at TOWA, says, “TOWA Vision 2032 targets sales of 100 billion yen (US$1.9 billion) and operating profit of 25 billion yen (US$477 million). In the first medium-term management plan, we will launch businesses to enhance profitability. We will make a paradigm shift of our own technologies by upgrading value, quality, and process know-how. In particular, we intend to develop new businesses, such as cutting tools and contract processing for coatings, based on core technologies, thus increasing profits.”

Under its long-term vision, TOWA plans to increase sales of cutting tools and contract processing business in FY2022 to 1.1 billion yen (US$8.45 million). This represents a yearly increase of 2.5-fold. In FY2024, it targets to bring it to 2.2 billion yen (US$16.9 million). These targets represent the first medium-term management plan (FY2022 to FY2024).

Moreover, the company plans to increase sales of the entire new business category, including the Total Solution Service (TSS). From 8.6 billion yen (US$66 million) in FY2022, it aims to increase it 35 percent after a year. In its TSS business, TOWA provides after-sale services for semiconductor manufacturing equipment. It proposes alteration and repair and handles sales of used equipment.

Under the first medium-term management plan, TOWA targets to post sales of 60 billion yen (US$461 million) and operating profit of 12.6 billion yen (US$96.8 million) in FY2024. The company plans to achieve these by implementing basic policies in the semiconductor manufacturing equipment and precision molding, chemical products, and laser businesses. Moreover, it also plans to develop new businesses.

Setting sights on the expansion of new businesses, TOWA completed in April its fourth production building. The new building was designed to produce cutting tools and contract processing business for coatings at Kyoto East Plant, its main plant in Kyoto Prefecture.

With this move, it significantly increased its production capability for cutting tools for metal processing, including cubic boron nitride (CBN) end mills, carbide end mills, and carbide drills. The demand for these cutting tools has been increasing. 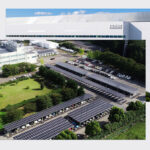