Autonomous mobile robots (AMR) have been gaining traction in automated transfer in factories and distribution centers, prompting more manufacturers to foray into the AMR market. With the expansion of the market, Chinese manufacturers, which have seen rapid growth of industrial robots, have been actively advancing to Japan.

Automated guided vehicles (AGVs) have already been widely used in factories and distribution centers. AGVs travel along magnetic tapes and landmarks and stop when they encounter obstacles. In contrast, AMRs autonomously travel based on maps without the need of guides. They detect people and obstacles and travel avoiding them.

Layout of manufacturing sites changes frequently, causing need to relayout guides for AGVs.  In contrast, AMRs feature expandability and flexibility, allowing to immerse in manufacturing lines of high-mix, low-volume production; processes whose layout changes in a short period of time; and existing factories, where the use of AGVs has been difficult.

The novel coronavirus (COVID-19) pandemic has propelled the momentum for robots to avoid close-contact environments and has expanded the AMR market. Several companies have been entering the market one after another, such as Japan’s Omron Corporation, which has been making headway in its entry into the AMR market.

THK Co., Ltd. has entered AMRs for industrial application on full scale to expand its robot business. The company has developed and commercialized SIGNAS transfer robot, which is equipped with its original autonomous movement control system and adopts the induction system without the need for route tapes.  The company has started receiving orders on full scale.

THK originally developed the SIGNAS jointly with Tokyu Construction Co., Ltd. as a transfer robot for use at construction sites. However, it has commercialized the robot eyeing demand in a wide range of fields, including factories. The SIGNAS is equipped with THK’s original control system, which moves autonomously, while identifying signposts that serve as markers using the built-in camera.

ASPINA, the corporate brand of Shinano Kenshi Co., Ltd., entered the robot field in 2019 by applying precision motor technology and positioning technology the company has nurtured over the years. The company has expanded its robot business, including the commercialization of robot hands as robot-related products, and then entered AMRs for manufacturing sites.

It will begin full-scale mass production in FY2022 through trial marketing started in June 2021.  ASPINA’s AMRs are equipped with the simultaneous localization and mapping (SLAM) function, a technology to perform self-position estimation and create environmental map.  Simply by having it run the actual travelling place, it automatically creates a map and installation in existing lines is also easy, requiring short time for preparation.

Aside from AMRs, manufacturers’ entry into related fields has also become active. Canon Inc. started offering video analysis software that includes visual SLAM technology, which uses a camera to perform self-position estimation and environmental map creation at the same time. Canon supplies the software, which serves as the eye of mobile robot, to AMR manufacturers. 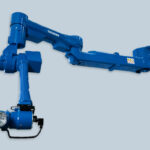