Keigan Inc. of Japan’s Kyoto prefecture has introduced Keigan ALI, an autonomous mobile robot (AMR). Equipped with its proprietary KeiganMotor module, the robot system introduced in July has a load capacity of 30kg.

This AMR uses simultaneous localization and mapping (SLAM) technology to create a map easily and move autonomously. Integrated with nine sensors including light detection and ranging (LiDAR), the AMR can carry objects and avoid people and obstacles.

As an automated guided vehicle (AGV), Kegain ALI can support optical line tracing and moves unmanned. At present, the company distributes this to five companies for use in factories and warehouses, contributing to labor saving measures. The company targets to sell 100 units of Keigan ALI by March 2022 and introduce a new model with load capacity of 200kg.

Keigan has been manufacturing its exclusive KeiganMotor modules since the company’s establishment in 2016. They supply these modules to various robots. Because of prodding from some of its customers for an easy-to-use and inexpensive transfer robot, the company started to develop autonomous mobile robots.

“Using our in-house motor module and a special board, we prototyped an AMR with a load capacity of 200kg, consisting of a differential two-wheel system allowing rotation on the spot. We showed it for the first time at the International Robot Exhibition 2019,” said Takashi Tokuda, President at Keigan. This marked the company’s foray in AMR commercialization.

“At first, we have developed Keigan HATO at end of 2020 and started its preselling in this year. Next, we developed and started selling Keigan ALI, which has a load capacity of 30 kg. The demand for this type of AMR is currently the highest in factories and warehouses,” Tokuda added.

The external dimensions are 325×372×1,000mm and drive unit of the mobile robot is the KeiganMotor module. A large-capacity USB mobile battery serves as the robot’s power supply and guarantees operation of up to 10 hours at maximum speed of 1km/h.

For communication it uses an access point connection through Wi-Fi. Remote control is possible even in places where Wi-Fi is not available by using tethering functions of a smartphone.

The company released Keigan ALI in July as its second mobile robot with a load capacity of 30kg. An application software installed in a mobile device can provide easy-to-use operation of the AMR. Users can set maps and tasks intuitively using the application and can change easily the layouts and work contents. The company is planning an update to enable the AMR to follow 2D markers.

The AMR can rotate on the spot by a differential two-wheel system that uses two in-house motor modules with a diameter of 69mm, a weight of 195g, a maximum torque of 0.5Nm, and a rotation speed of 140rpm. The maximum speed is 0.5m/sec (1.8km/h) and grade ability is 1.1 degrees. The step climbing capacity is 5mm for the transport weight up to 30kg and 10mm up to 10kg. The stop position accuracy is ±75mm.

Continuous use is possible for eight hours or 5 km with the cartridge-type lithium-ion battery (DC24V22Ah) included as an accessary. The battery charging time is five hours (090%). An aluminum frame etc. can be easily attached to multiple screw holes on the top surface of the main body.

Tokuda said the company takes pride with the easy-to-use features of its collaborative robots, the price point is approximately ¥1 million (US$9,000).

“To take advantage of the fact the robot is made in Japan, we plan to upgrade the software and hardware and expand the lineup by adding a product with load capacity of 200kg. We will also collaborate with robot system integrators to propose use in factories and warehouses,” said Tokuda.

The company will start collaboration with Robot System Integrator Association and a trading company that can provide sales and maintenance support nationwide. The company has developed and produced separate motor modules, in which the customer can select one from three types of motors (f69mm and 195g; f46mm and 91g; and f40mm and 69g). After which, they can combine it with a controller unit that houses a high-performance microcomputer, wireless, and sensors into a compact case of 70×70mm and weighs 34g. It also developed and produced an all-in-one multifunctional motor module in which the body, which has dimensions 70×70×35.6mm and weight 340g, integrate the controller and the motor. 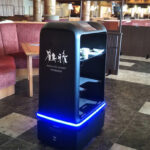