China’s robot industry is on a growth path. According to China’s Ministry of Industry and Information Technology (MIIT) the country’s robot market is forecast to reach RMB 83.9 billion (US$13 billion) in 2021. Of this total, the market of industrial robots is forecast to account for RMB 44.57 billion (US$6.91 billion), maintaining high growth of 18.3 percent annual average between 2016 and 2023.

Labor saving and automation of the manufacturing industry are major trends in China as well, creating the largest industrial robot market.

According to Japan Robot Association (JARA), both orders and production of industrial robots in Japan from April to June 2021 marked record figures in terms of value. Shipments also increased steadily particularly those going to China, which account for more than 60 percent of exports.

Sales of robots in terms of unit (main body) by foreign manufacturers accounted for about 70 percent in 2019. However, with the promotion of the “Made in China 2025” policy, Chinese manufacturers rapidly expanded in-house production. Particularly, leading industrial robot manufacturers in China have been making remarkable development.

Nanjing Panda Electronics Co., Ltd., based in Nanjing, is comparable to the SIASUN Group in terms of size. It mainly adopts Japanese-made components in the drive section of robots.

Anhui A&E Robot Technologies Co., Ltd., which is based in Anhui Province, has research and development centers in Beijing, Shanghai, and Anhui.

Aside from these manufacturers, Estun Automation Co., Ltd. in Nanjing, Guangdong Topstar Technology Co., Ltd. in Dongguan, and Shanghai STEP Electric Corporation in Shanghai play their part in the Chinese robot industry as leading companies.

In-house production of key parts of industrial robots also advances. Breakthroughs in important core technologies and components, such as motion controllers, servo drives, and precision decelerators are being increasingly achieved. Many industry observers view the technological level of robots for small-scale production have already reached its peak.

China’s industrial robots are used for a wide range of applications. These are classified into assembly and transfer, like SCARA robots and compact vertical articulated robots for the production of smartphones and electronic devices; welding and painting mainly in automobile and electric vehicle (EV) manufacturing lines and clean transfer for flat panel displays, wafer transfer, and others; and actuators, like single-axis robots and orthogonal robots. Integrated applications have also made great advances.

Moreover, Chinese robot manufacturers put emphasis on exporting their products. Geek+, a representative manufacturer of robots, like automated guided vehicles for plants and logistics in China, exports to about 20 countries. It passed safety tests and verification by TÜV Rheinland, an international certification organization. 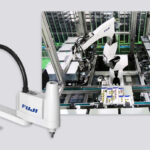 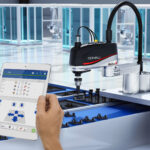