Global semiconductor chip market keeps growing, riding on strong demand for intelligence and connected devices. So does semiconductor equipment market. Especially, demand for advanced lithography equipment like EUV, or extreme ultraviolets will keep buzzing up, as chip makers are clamoring for more chips out of wafer to meet solid demand across all market segments.

At an Investor Day 2021 held online on Sept 30, Peter Wennink, CEO with ASML, the Netherlands-based photolithography equipment maker said, “I am very optimistic (about the future). There is policy drive and industry drive to growth. If we look at the semiconductor end market, we expect that the semiconductor industry would grow at a CAGR of 7% through 2025, as there are key growth segments that start from smart phones, including consumer electronics, personal computing, wired and wireless infrastructures, data centers and servers, automotive, and industrial IoTs.”

According to CEO, the commercial rollout of 5G technology has been a key technology enabler for explosive growth in demand for these connected edge devices, transferring back and forth data between these devices and cloud platform in what’s called as distributed computing.

Quoting statistics from market research firm IDC, he said that there are estimated 40 billion connected devices in use today.

As the penetration of the 5G technology is accelerating, there is expected to be 350 billion connected devices in ten years, he predicted.

70 Units of EUV to Roll Off Line

Buoying sales of these devices would spur up demand for chips from CPU to memory chips to    sensors to wired and wireless chips to mixed signal analog chips, encouraging chip makers to invest in chip-making equipment to build up more wafer fab capacity.

Public sectors are joining the investment binge, too, as semiconductors are increasingly becoming inevitable part of major advanced countries’ Industry 4.0 policy initiative to digitalize their economies.

U.S., Japan, EU, China and even Korea announced that they would create government-led public funds to finance or incentivize their sovereign chip makers’ wafer capacity and technology build up project. For example, U.S. plans to earmark US$50 billion in the public fund to finance and incentivize U.S. chip makers’ activities to help regain global leadership in advanced chip manufacturing.

EU also plans to raise US$24 billion to US$35 billion combined for private and public funds to finance chip-making capacity and R&D build-up projects to rebuild Europe’s capacity in high-end microelectronics.

All combined, these spending binges are translating into huge jumps in wafer capacity. ASML predicts that monthly new wafer starts would grow at CGAR of 5.2% per year from 2020 through 2025, or by 500,000 wafers per year on average, as capital spending on semi equipment would grow at a CAGR of 5.9% through 2025.

Especially, spending on photolithography equipment is expected to outgrowth total capital spending  on wafer equipment, growing at a CAGR of 13.8% through 2025, as demand for advanced nodes of below 28nm as well as matured nodes of above 40nm are growing, too

“Lithography capex will grow because chip intensity is increasing. Of course, there is the introduction of EUV for advanced nodes, “CEO Peter Wennink said.

To meet such demand boom for lithography equipment, ASML is now not only angling to boost its production capacity of DUV (deep ultraviolet)  as well as EUV (extreme ultraviolet equipment), but also improve productivity and cut short the time-to-market.

On top of that, the company also aims to improve productivity by 25% to 60%. “ If we are to supply our customers, who will build up more wafer capacity, we need to do something, We 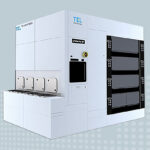