The company has an experimental facility in Ibaraki prefecture, and recently has succeeded in collecting electricity from concrete. It also envisions a model house-like building where sustainable life can be created.

Electricity can be continuously obtained regardless of the weather and time zone. The new development is a new energy harvesting technology that supports society and living. It enables lighting, sensing, and information communication even in the event of a disaster. It also supports non-electric environment (off-the-grid) separated from the power grid. The new energy harvesting method is expected to be commercialized in a wide range of fields, and to develop markets on a global scale.

Energy harvesting methods are quite diverse. One example is harvesting that utilizes microorganisms.

Nakagawa collects and uses electricity effectively through elements in the environment like as soil and water. A current collector or terminal is inserted, and the collected electricity is amplified with a converter.

He has been trying to collect electricity from a variety of things that are noticeable, from general buildings to food and daily necessities. Nakagawa noted that soils suitable for the collection of electricity are those with an appropriate aggregate structure or soils good for growing crops.

In October 2021, he gave a lecture at The Total Solution Exhibition for Electronic Equipment, showing the high level of interest in the industry.

In Hitachiota City, Ibaraki Prefecture, where Nakagawa was born, he is conducting experiments by applying the technology to light LEDs and operating microcomputers and sensors to implement internet of things (IoT) technology.

The present technology enables data transmission once every few minutes. It was able to demonstrate sensing and notification of traps for capturing wild boars and security of cultural properties such as shrines and private houses. The number of marginal villages has increased in various parts of Japan. Ensuring emergency networks and safety of surroundings of houses has become an important issue. This technology can support people’s lives through IoT even in mountainous and semi-mountainous regions where radio waves are difficult to reach.

For social implementation, KU-AN was launched as an off-grid test site and has been used as a base. At the site, electricity was successfully collected from concrete.

The company has prepared a device set that can collect electricity of 1V or higher. If 100 sets are connected, it can generate 100V of electricity. This can supply the electricity requirement for lighting of a general living environment. It also considers collecting electricity from various materials such as waste. In the future, it plans to collect electricity from the human body as well. Development of auxiliary equipment without batteries becomes possible as well as collection of biometric information with wearable smart devices.

The ultra-small current collector technology was first used for commercial purpose at the lighting of Christmas trees at Palace Hotel Tokyo. The technology uses organic fertilizer made from compost consisting of food waste generated in the building.

Nakagawa has established “Future Brain Lab” to solicit participation of interested companies in order to spread the technology. From next year, he will start full-scale activities under the themes of information and society, life and health, nature and environment, sensitivity and art, and human resources and education.

Companies including Asahi Kasei Corporation are technically cooperating in the off-the-grid initiative. JGC Holdings Corporation, Mizuho Bank Ltd., and major electric appliance companies have also expressed interests and some of them have decided to participate.

In SHI-ZEN, an experimental building to be built, the company will make full use of the technology to collect electricity using concrete. The company will also consider supply of electricity for the house through skeleton and gutters.

Tripod Design invites a wide range of companies to co-create in addition to those mentioned above. In the future, it will work on more efficient current collecting methods and miniaturization of current collectors, aiming to collect current from the air.

*Nakagawa is an expert in design and has served as a specially appointed professor at the Graduate School of Engineering, the University of Tokyo. He is currently a visiting professor at Graduate School of Medicine, Nagoya University. He is an expert in universal design and has been involved in the planning and development of many Japanese and foreign companies. He also promotes activities that connect sensing technology and design. He works as a product designer, a design engineer, and a design consultant at Tripod Design. 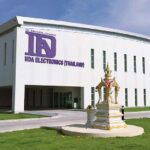