Nippon Thompson Co., Ltd. has commercialized a pick and place unit for semiconductor manufacturing equipment in collaboration with U.S-based SMAC Corporation. This move expands Nippon Thompson’s mechatronic products that combine linear motion rolling guides and motors. The company has been making earnest efforts to expand the demand for the pick and place unit.

The pick and place unit uses Nippon Thompson’s Nano Linear NT or LT for the XY axes. It is a compact ten-axis control system that uses the SMAC actuator LCR for the Zθ axis. The new system achieves high-precision positioning and fine hydraulic and torque control.

The unit can support not only the original drivers of Nippon Thompson and SMAC, but also those for motion network EtherCAT and SSCNET III/H. Thus, it paves way for the construction of advanced systems with reduced wiring. It adopts a soft-landing control function through which the rod tip of the SMAC actuator can be softly landed on the work surface.

The new pick and place unit is suitable for picking and placing and assembly of delicate and fragile electronic components. It also supports customization of the unit. In board mounting process, diced semiconductor chips and electronic components are picked up without damage, positioned accurately, and mounted on a board without damage. In press-fitting of lenses and assembly of electronic parts, an easily deformed resin lens is picked up and inserted into the lens barrel at optimum pressure while keeping the lens horizontal.

In the chip transfer process, the diced semiconductor chip is picked up without damage. It is then moved at high speed and placed on the tray without damage.

Nippon Thompson strengthens the development of original products as a technology development-based company. To date, the company has brought to market single-item business, such as linear motion rolling guides. It has also commercialized the mechatronics series consisting of products created from the fusion of precision processing technology and electronics.

One example is a precision positioning table that incorporates a linear motion series, a ball screw, and a motor between the bed and slide table. It is used as a positioning mechanism for semiconductor manufacturing, flat panel display manufacturing, and various precision equipment.

The company’s Toki Mechatronics Center has been established in Toki Factory (Gifu Prefecture) in Japan. It integrates several departments, such as mechatronic product development, parts procurement, and manufacturing.

Meanwhile, SMAC is an American manufacturer of moving coil type electric actuators (small linear motors). It has sales offices in countries in Europe and Southeast Asia aside from the United States. It sells XY stages as well as actuators in more than 16 countries. Nippon Thompson also sells SMAC products as an SMAC distributor. 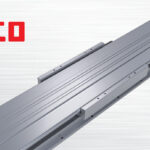