Semiconductor transistor structures are getting more and more complex, and are even transforming from planar shapes into 3D architecture to incorporate more of functional circuitry and blocks in a given space. The growing complexity of transistor structure translates into dramatic increases in the chip-making processes – several hundreds of steps-, as chip makers have to repeatedly deposit layers after layer of raw materials -mostly ionized chemical gases- on top of each other.

The complexity spells out huge market opportunities for Horiba Ltd., a maker of MFC, or mass flow controller.

“We have seen big jumps both in new and replacement demand for MFCs, chalking up biggest jump in our sales in 2021. Chip makers have invested hugely in new facilities, placing big new orders for chip equipment like etching tools and CVDs. Replacement orders were also rising, too, as increases in chipmaking process steps have necessarily been accompanying more uses of novel toxic chemical gases, which will easily corrode metal innards of MFCs,” said Kim Sung Hwan, president and CEO with Horiba STEC Korea, Ltd., a Korean subsidiary of Horiba Ltd. of Japan.

Coming built with a flow rate control valve, a sensor, a piezo actuator, and a CPU-based PCB, MFC module are sorts of controllers that controls a specific type of liquid or gas at a particular rate of flow.

Mainly built in CVD, or chemical vapor deposition equipment as well as an etching equipment, Horiba’s MFN module controls the inlet flow of chemical gases into these machines by opening and closing a control valve.

As pre-set, or pre-programmed amounts of gases is only to be flowed into the machines to etch out materials in the etching tools, or to be deposited a silicon wafer to create layers after layers of circuitries, the MFC is one of crucial building blocks of those machines.

Otherwise, whenever the gases are overflowed or run short, it will inflict serious defects, resulting on lower-than-expected yield – the ratio of marketable items versus the total production.

So, demand for ultra-high precision MFC modules is soaring, as the accurate and precise timing for valve shut-off and-on determines whether gases are flowed in as accurately as programmed.

What can control all these operations are a CPU-powered circuitry board, a sort of brain that comes built with A/D and D/A converters, CPU, a valve control circuitry.

Working in sync with an embedded firmware software and a sensor, the CPU-powered board can not only self-diagnose what went wrong with a valve operation, but also alerts in advance of what will go wrong with its operation for foreseeable future using Horiba’s long-held big data in what’s called as Big Data Analytics

Anti-corrosiveness is important, too, as most of gases used in CVD and etching equipment are toxic, which has strong corrosive characteristics.

A souped-up version of predecessor D500, the D700 series highlights an add-on feature called as “on-tool gas and full-scale configuration change’, which configure or recalibrate its operation, offering flexibility in optimizing processes.

A firmware-driven monitoring function is also what sets itself apart from competitions, as it allows equipment vendors or users to utilize Horiba’s decades-old Big Data Library to diagnose or predict operation failures in what’s called as smarter failure prediction. Another outstanding feature is its MRMG (multi-range and multi-gas) functionality for small flow rate of Bin101-Bin105), which allow users to flexibly respond to processes requiring small flow rate.

“Samsung Electronics will continue to invest in 2021 to complete the construction of its P3 wafer fabrication facility, while breaking ground for P4. Sk hynix is also working on its M16 facility. That; why we expect another stellar year,” said CEO Kim. 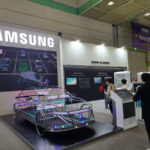