Recent trends in electronics point to miniaturization of components and high-density mounting of printed circuit boards (PCBs). These have led to higher chances of reworking of ultrasmall components, such as 0402 components and mini light-emitting diodes (LEDs).

In the past, in many cases, PCBs were discarded when defects occur in PCB components. Nowadays, needs for PCB reuse have increased. This is prompted by recent environmental issues and rising prices of substrates and components. Also, shortage in the supply of electronic components and semiconductors are key factors as well.

Responding to the increasing needs for the rework of PCBs in the market, Tokyo-based DEN-ON INSTRUMENTS CO., LTD. has developed original automated rework stations, and has been endeavoring to expand its business. Aside from rework stations, the company also offers soldering and desoldering-related products, including automated temperature control soldering irons, solder removing tools, and far infrared preheaters.

For one, the SDR-1000 automated rework station automatically performs position setting and alignment work each time simply by setting PCBs and components. The system automatically recognizes XY axes, θ, height and others for the alignment of components and mounting locations.

IPC International, Inc., which is based in Illinois, the United States, sets up and promotes international standards on qualities and processes of PCBs for electronic devices and manufacturing equipment. The industry group also identifies the importance of rework. 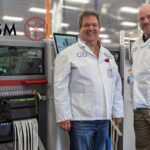