Locator Studio is a great tool for fast picking of oriented and semi-oriented parts in collision-free environments. The robot approaches objects without the need for advanced path planning with collision avoidance.

Also, Locator Studio is compatible with PhoXi 3D Scanners as well as MotionCam-3D. Thus, users can get exceptional resolution, submillimeter accuracy, and scanning range from 161 up to 3780mm.

Easy calibration and configuration via the web interface

Moreover, Locator Studio supports multiple vision systems, which can be fixed mounted above the scene or attached to the robotic arm. Object localization is based on the same principles as conventional technologies. Thus, it does not require any special knowledge or new programming language skills.

A single scan enables localization of multiple objects and their pose estimation in X, Y, and Z (6-DOF pose) while the robot picks the previous round of parts. Users can even switch between solutions to search for different parts.

Additionally, the tool supports all major robotic brands and industrial manipulators. Thanks to an open and thoroughly documented TCP/IP protocol. The TCP/IP interface enables communication via any middleman, including an arbitrary robotic controller, PC with custom setups, or PLC.

Locator Studio is a great tool for vision-guided robotics applications where the objects can be approached by the robot directly, without the need for advanced path planning with collision avoidance.

The most common scenarios are objects lying on a flat surface, ground, conveyors, or stacked in racks. A typical scenario, where advanced path planning with collision avoidance is required is a bin picking application.

Generally, it is necessary to account for many possible collisions between the robot and the bin, robot and the part, robot and the camera system, including accounting for gripper design and its different states (empty gripper or gripper holding the part). When parts are overlapping, multiple gripping points are usually considered and the most suitable path to the non-colliding object has to be found. Photoneo’s leading solution for advanced applications – Bin Picking Studio provides all this functionality.

Mainly, Locator Studio is ideal for robot-guided applications based on referenced position: picking objects from trays, conveyor belts, racks, or to locate components, fixtures for precise placing, screwing, and assembly. 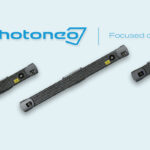