Korea’s professional service robot market is poised to take off, as the country’s e-commerce retailers, restaurants, coffee & beverage chain stores, and even logistics system providers are replacing   human workforce with robots. A fleet of robots are even deployed across homes to take care of the elderly, to housekeep

Leading the robotization are the country’s two largest electronics makers – LG Electronics and Samsung Electronics – who are staking out robots as a next generation of bread baskets.

To cash in on the huge growth potential, LG Electronics has recently unleashed a fleet of service robots called as CLOi Guide Bot, which is its second generation of Guide Robot series. LG has deployed two CLOi guide bots across COEX shopping mall floor spaces in Gangnam district, Seoul, Korea to test-run how well they perform.

Mainly working as a helper either to introduce building amenities and facilities or guide visitors to walk through route maps, the bot also doubles as a security guard in night time to detect break-ins and alert of them.

LG’s first generation of CLOi guide bots, which debuted in 2018, have been deployed in volume since then across a variety of premises like Incheon Airport and Hyundai Department Store  to serve as a mobile information kiosk, an unmanned help desk, and etc.

The rapid deployment is giving LG a compelling motivation to speed up its advance in the robot market, as the consumer electronics titan has been trying to diversify its way into stationary professional robot market for healthcare and medical tasks, industrial robot market for smart factories, and automated guided vehicle market for deliveries and logistics and assembly lines.

The robot business is one of LG’s three future cash crops, including EV battery and automotive parts and components businesses.

For example, LG has recently unveiled lawn mowing robots and collaborative robots to sell them both at home and abroad.

Coming built with object detection sensors, autonomous driving and remote controlling system, the lawn mower robot is now being sold in the U.S.

The Handy housemaid bot can detect objects and move around to help clean dishes or a kitchen table. The two models are an addition to Samsung’s previous robot product line-up that includes robot cleaner Bespoke JetBot AI and Samsun GEMS wearable robots.

The active stereo camera and LiDAR sensor can allow the bot to sense objects and spaces in a 3 dimension and so create accurate space map to navigate through rooms.

A short for gait enhancing and motivating system, the GEMES is a sort of robot wearable that can assist physically handicapped users, who have trouble walking, running and standing up, coming in three models –GEMS hip, GEMS knee, and GEMS ankle.

The high-prized market potential is a convincing lure for the two consumer electronics giants to accelerate their respective foray into robotics market. 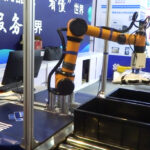 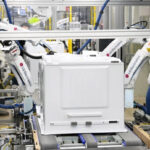