JUKI Corporation has been enriching its lineup of automated electronic components warehouses, or intelligent storage management systems, which constitute JUKI Smart Solution, and has been proposing the warehouses to other industries. JUKI Smart Solution is its flagship networking solution that realizes high-efficiency production of surface mounting lines.

The company has added the ISM3900 extension module to be connected to the back of ISM3600, enabling the storage of more than 11,000 reels. ISM3900 can be integrally operated with ISM3600.

Proposal to Other Industries

JUKI has begun to propose the use of automated components warehouses not only for electronic components but also for storage of products other than electronics, such as plastic molded components and metal components, and has been cultivating other markets. The company pitches the efficient transfer of complex combination components through automated pickup and the linkage with AGV.

The RV-2-3DH three-dimensional (3D) printed circuit board inspection system adopts a 12-million-pixel camera. By applying the process mode, it can be used for measurement and visual inspection applications in various factories in addition to electronic board manufacturing factories. This system achieves automation of visual inspection, which used to be performed manually, as well as labor saving, and quality improvements, including planarity inspection of processed components and clearance inspection of machines. The company has already supplied the system for the inspection of glass lenses. 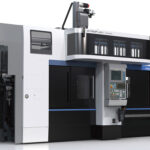