Major manufacturers have long used dedicated industrial robots to boost efficiency and throughput. Now, compact industrial robots, which can be integrated cost effectively into even small production lines, are available.

KUKA Robotics Corp. is one of the growing number of vendors that have begun producing compact industrial robotic arms targeting small- to mid-size operations. Its AGILUS family is available in three versions with different reaches and load ratings: 540mm and 3kg (KR 3 R540); 900mm and 6kg (KR 6 R900-2); and 1,100mm and 10kg (KR 10 R1100-2) respectively. All three have the same overall form and behavior and are available in kits, complete with a controller unit and handheld operator unit for controlling, monitoring, and programming the robot’s activity.

The mechanical design of the AGILUS devices gives insight into the flexibility of robotic arms in general (Figure 1).

Like many robotic arms, the AGILUS devices have six movement axes: a rotating base (A1), a base arm (A2), a link arm (A3), an in-line wrist that can rotate (A4) and bend (A5), and a rotating mounting flange (A6) where end-effector devices are attached. Axes A2 to A5 work together to position the center of the wrist anywhere within the vertical operating profile, shown in Photo 3(a), while the rotating base can direct that vertical profile almost anywhere around the arm. The center of mass for the end effector attachment can be offset from this position, as shown. The arm can be mounted on a floor, bench, cart, wall, or ceiling as desired without impeding operation.

Controlling a robot’s movement with all these axes used to require sophisticated programming skills, but that has now been simplified. Robotic arms typically come with a controller computer and an interface tablet that allows a user to move the robot using simple directional buttons to reach desired “waypoints”. Logging a series of waypoints defines the complete sequence of motions the robot can follow automatically. Some robotic systems also allow the user to manually position the robot arm to desired waypoints instead of using the directional buttons.

Both approaches serve to “teach” the robot by example what movements it is to execute, which it will then be able to repeat upon command. The ability for the user to teach rather than code not only simplifies initial robot setup for a task, it allows for easy adaptation of movement as requirements evolve. The control tablet further allows the user to refine and correct movements as needed during production activity.

These types of robotic arms with simplified control programming provide an off-the-shelf foundation for industrial automation solutions, serving as the position manipulator for an end-effector mechanism appropriate for the task to be performed. Such end-effector mechanisms can range from simple grippers for pickup, position, and place operations, to machine tools, such as screwdrivers and drills, to complex systems such as soldering irons and paint sprayers.

Complete application solutions are even becoming available as stock solutions from robotic arm vendors. KUKA Robotics, for example, offers a series of “ready-to-use” systems for riveting, paint spraying, arc or spot welding, and micro-screw fastening applications, among others (Photo 1). These systems include end-effector system elements, controller elements, and system software along with the robotic arm as a pre-configured automation package.

Users are not limited to such pre-configured systems when applying compact robot technology in their operations. Because of the robotic arm’s installation and movement flexibility, ease of programming, and versatile end-effector attachment flange, a wide variety of custom applications are possible.

Why Use Robotic Co-Workers

To maximize benefit, most industrial robots for large-scale operation have tended to be large and fast, working with materials and at speeds beyond human capabilities (Photo 2). The momentum of the robot can be high enough to injure or even kill any worker struck while in the movement path. To keep workers safe, large industrial robots need to be isolated behind cages or other barriers with interlocks so that human entry into their operating space will shut them down.

The introduction of compact robotic manipulator arms, such as the AGILUS KR 3 R540 (Photo 3), has given industrial facilities more options. These compact industrial robots can collaborate with a human operator to offload repetitive tasks that would otherwise tire the operator and lead to mistakes. The operator and the robot share a workspace, helping to minimize the robot’s use of valuable production floor space and improve its cost effectiveness (Photo 4).

Compact collaborative robots—or cobots—like all powered machinery, have the potential to cause injury if not utilized properly. Integration of a cobot into a production line requires careful consideration to the issue of operator safety. Factors to keep in mind include the robot’s range and speed of motion, the materials it is handling, and the operator’s method and frequency of interaction. Once those are understood, appropriate safety-enhancing features can be incorporated into the system design.

To identify the potential risks, developers must first fully understand the system’s scope of operations, the robot’s movement characteristics, the workspace and workflow, and other similar factors. These sources include any possible robot-human interaction that might result in an injury of some kind.

Once the risks are identified, each must be evaluated. This evaluation categorizes each such interaction as a negligible, low, medium, high, or very high risk using three key criteria: 1) severity of potential injury; 2) frequency and/or duration of exposure to the hazard, and 3) probability of avoiding the hazard.

Developers selecting a robot for a collaborative application should keep in mind how they might implement one or more mitigation methods. The robot’s physical design as well as the systems that control it are all factors to evaluate in determining how readily safety measures can be implemented. Typically, however, robot vendors have worked to make their systems safety ready.

KUKA’s AGILUS robots are designed with rounded surfaces under energy absorbing padding to minimize the pressure of contact. Joints are covered to eliminate any pinching hazards. The robots also offer adjustable mechanical stops for key movement axes so that developers can physically restrict the robot’s operating space.

The KR C4 controller comes with integrated safety software that includes routines for implementing safety-rated and emergency stops as well as the ability to monitor industry standard external sensors establishing a safety fence.

KUKA.SafeOperation software enhances this internal monitoring by allowing developers to define a fixed operating cell: a convex polygon with three to ten corners outside of which the robot should never move (Figure 2).

Industrial robots have traditionally been associated with large industrial facilities, mainly due to cost, complexity, and safety. However, an ever widening array of repetitive tasks, from simple positioning to painting complex shapes, are becoming economically feasible for compact industrial robots.

On the other hand, robots do present potential hazards that industrial automation developers must take into account. While newly developed standards for robot safety do help, the availability of robotic systems that have been built from the ground up with safety as a prime consideration makes the integration of robots into a workflow much easier  and safer.

The author is Rich Miron from Digi-Key Electronics. 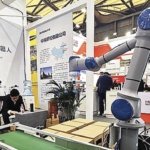 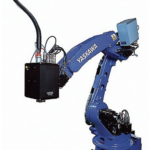 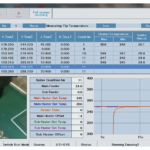