Manufacturers’ interest in India continues to grow over the years. Currently, investments to build factories in the country have started and will continue to accelerate this year.

The population of India has been continuing to increase. At present, it has a population of about 1.3 billion, the second largest in the world after China’s 1.4 billion. Forecasts said the country’s total population in 2027 will take over that of China, whose population will become an ageing society by then. Thus, the proportion of productive-age population in India will be big as well.

According to the announcement of the Indian government, gross domestic product (GDP) in July to September (Q3) of 2021 grew 8.4 percent year-on-year, recording positive growth for the fourth consecutive quarter. Thus, India’s GDP has recovered to its pre-pandemic level.

Meanwhile, China’s GDP grew 4.9 percent year-on-year in the same quarter according to the announcement of the National Bureau of Statistics of China.

Moreover, one of the major policies of the administration of Indian Prime Minister Narendra is the “Make in India” program. Specifically, the government targets to make India the hub of research and development and manufacturing.

Meanwhile, the Indian government announced last month that it would inject a total of US$23 billion to promote the electronics industry, focusing on semiconductors, including related fields. These include advanced chemistry cells (ACC), automobiles and automotive components, and communications network products.

Of this total, the government will use US$7.6 million will use to promote the semiconductor and display industries. Here, the central government will subsidize up to 50 percent of the expenses. Furthermore, it will also provide financial assistance of up to 50 percent of the investment costs to semiconductor and display manufacturers to build new plants.

In addition, constructing new facilities, such as compound semiconductor and semiconductor package factories, the central government will provide financial assistance of up to 30 percent of investment costs.

Investments by Japanese companies to India have been increasing since 2015. Recently, investments have become more active. In 2019, about 1,500 Japanese companies were operating in India. They were manufacturers of transportation machinery and equipment, chemical engineering, electrical apparatuses, and others.

Factory automation (FA) and manufacturing equipment manufacturers are hopeful on the growth potential of India and have been expanding investments in the country for the past years. FUJI Corporation established FUJI INDIA CORPORATION PRIVATE LIMITED as a subsidiary in Gurugram in Haryana State. It started operations in March 2020.

THK Co., Ltd. completed and started operations of its India plant in the fall of 2021. It stands on a 205,000sq.m-lot. In the first phase, it produces linear motion (LM) guides on a floor area of 37,000sq.m. Meanwhile, the company plans to actively expand operations in India. For the time being the India plant will produce mainly products for overseas market, and when the domestic demand increases, it will make 90 percent of products for the Indian domestic market.

Mitsubishi Electric Corporation established a new production base in TALEGAON, Pune, and will commence the production of inverters and small sequencers in 2023.  In the future, the company will expand the Indian plant as a global production base. 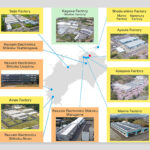